The reward for all that time painting? The pleasure of watching them all get blown up!


So after almost two and half months of painting I decided it was time enough to try and show off the game and sucker...erm...persuade some of my local gaming buddies to try it out. Ian, Peter, and I all got together and ran our way through a simple demo game trying out the basic rules with Command Cards.

The armies were 900 points each with a wide selection of units focusing on the boxed sets with added command units and some heavy and fast support.

Simply put the Hawk Wargames Ruinscape terrain package is the single best terrain purchase I've made in years. It is an amazing value for $35.99 (street price on web stores) giving you an intricate and modular 6x4 gaming table layout that is flooded with options. The tiles are two sided and can be laid out to form dozens of different possible sections of roads and parks and buildings. I combined it with some 10-15mm trees and hills I already owned (after all the occupied worlds have been in ruins for over a hundred years...) and the effect was impressive. My long term plan is to slowly add in bits and pieces of MDF buildings and statues and other terrain points but for a starting set this value can't be beat. I plan on using this for Dropzone Commander and Robotech RPG tactics but I could see it being used for any small scale futuristic (PlanetFall) or even modern world setting (for modern world Flames of War variants or other game systems).  It's really worth checking out. 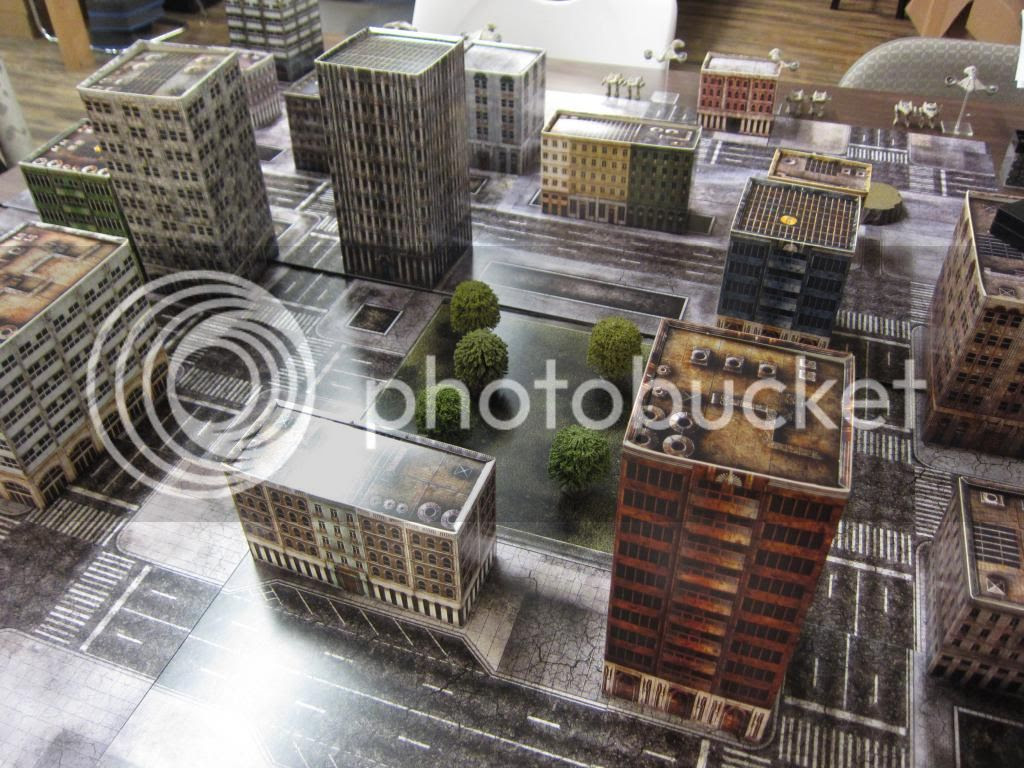 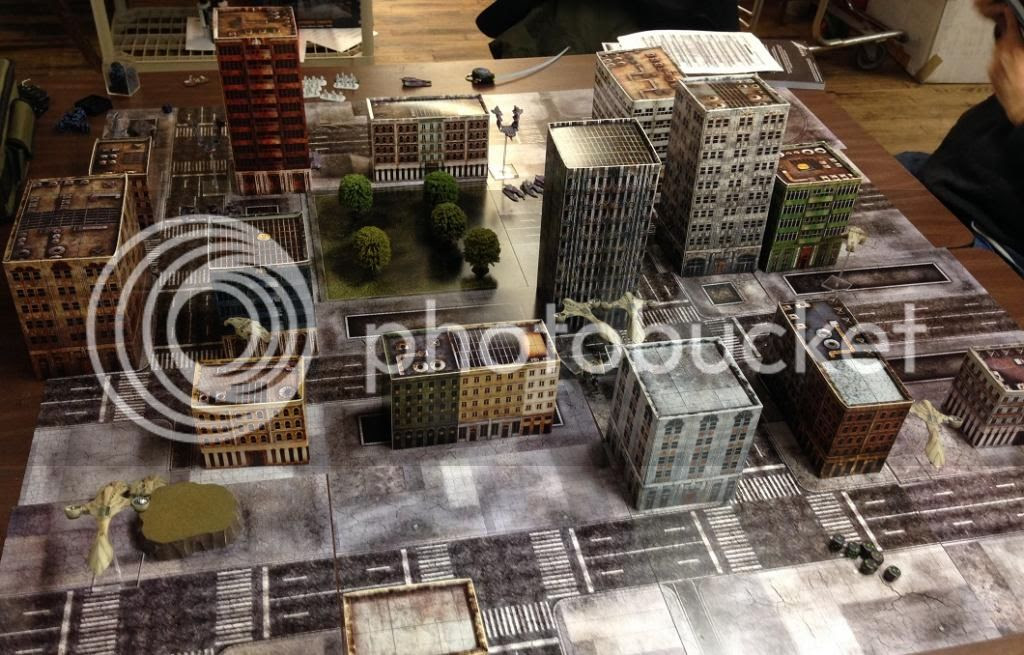 The actual game played with a faster pace than I was expecting. Movement is quick and the rules and game play with a great pacing. The "you go/I go" system is used to great effect here and the movement and counter movement are the biggest parts of strategy in the game. Units move fast and can redeploy fairly quickly but the fact they can't shoot the turn they land means you have to plan your movement from the get-go or you'll find yourself quickly behind in terms of firepower at key locations. The game seems to really rely on a combined arms approach to game play. You need dedicated anti-air to take out transports and insure your units arrive safely or just to combat the fast speeds of skimmers in the game. You need anti armour to take out your opponents anti-air to try and dominate the movement phases and you need infantry take objectives. For our first game we simply had a neutral third party place down two objectives and added a single focal point to give a second route to victory points. 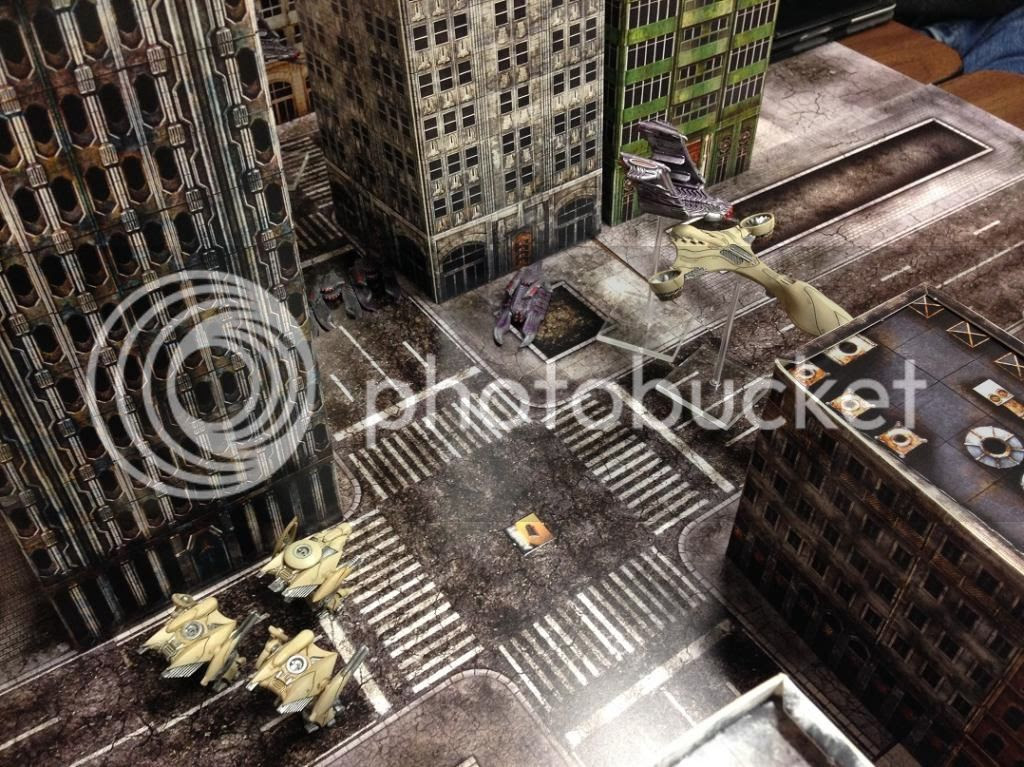 (Scourge heavy tanks exchange fire with a concentrated group of PHR walkers. Both an Odin and Slayer are reduced to molten slag on turn 3)

Combat feels very deadly with most units not being able to sustain fire for long with most hits resulting in kills. Even the mighty PHR toughness really can't sustain concentrated fire for other enemy heavies. 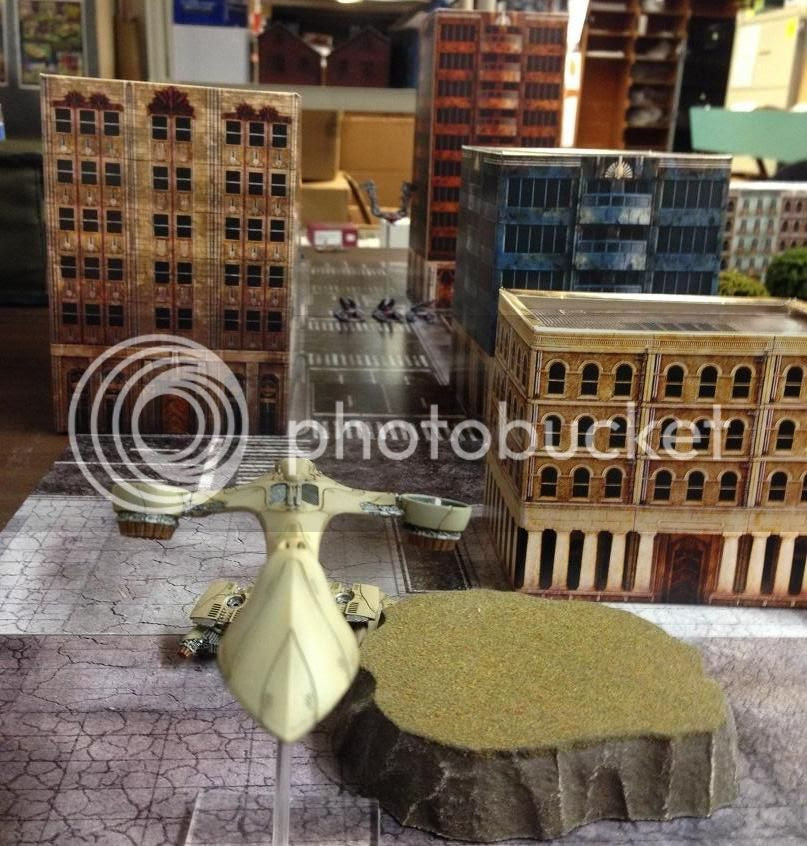 (A bird's (Dropship's?) eye view of the incoming scourge. The Helios are the lone guardians of the left flank trying to keep the might of the scourge from killing the immortals and capturing their prize) 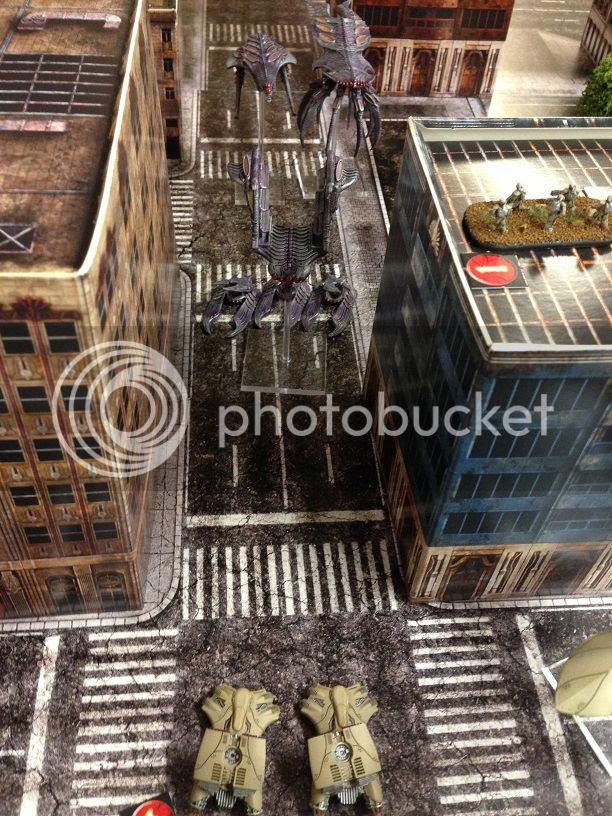 Melee combat between foot troops is a key part of the game. It's interesting in that the rules for it feel like a subgame and don't rely on any of the other units primary mechanics. The emphasis is on fast dice (and lots of it!) while giving the impressions of the horrors of close combat and as casualties mount fast combat units lose efficacy when the bodies pile up.

Each phase and segment of the game felt pretty fluid and important such that nothing that was brought to the table felt useless. I've read a lot of positive reviews of how much time Hawk spends trying to balance the units and my first (early) impression is that it's very true. It's too early to say for sure but overall both forces felt unique in their play style.  The PHR are slow and steady but harder to kill with their above average armour and multiple hull points in every model and pack a good punch
for their weight. The Scourge are absurdly fast in comparison and very hard to hit with their multiple skimmers but are relatively speaking made of paper-mache.

We played just to learn the rules so there was no real winner or loser. The game flows well and has a great sense of scale and a real three dimensional feel when you see the varying heights of the buildings and get down on eye level to determine line of sight on all the units.

1. Good unit balance.
2. Good mix of objective focused game play and lots of killing.
3. Good game pacing and clarity of rules.
4. High need for tactically sound choices for movement and target selection. Since most models don't have tons of firepower and the game relies on "you go, I go" target selection is extremely important.
5. Beautiful figures and nice affordable terrain.

1. Even the vaunted PHR felt "fragile" in the sense that combat was very deadly. Maybe too deadly. It could have been my dice rolling versus Ian's (Ian couldn't buy a roll over a 3) but much of the time every dice I rolled killed something. With so few models on the table that might overemphasize who goes first. Command cards and more units on the table (standard tournament games are 1500) should change this and, to be fair, I was rolling pretty godly so this is just a first impression.

2. Destroying buildings is an integral part of the game. I worry, a bit, that it might be too much of the game. Fighting enemy infantry in buildings is more risky than simply blowing their buildings up and I want a game of units fighting units not "everyone shoot the closest building".

Nothing yet.  No one aspect of the game felt overpowering which is, in my opinion, a good thing.

After some discussion of tactics and a beer and a sandwich at the local pub I think I've managed to sell two people on the game so it looks like, so far, all my time painting isn't for naught...

A quick update on a few new painted additions: 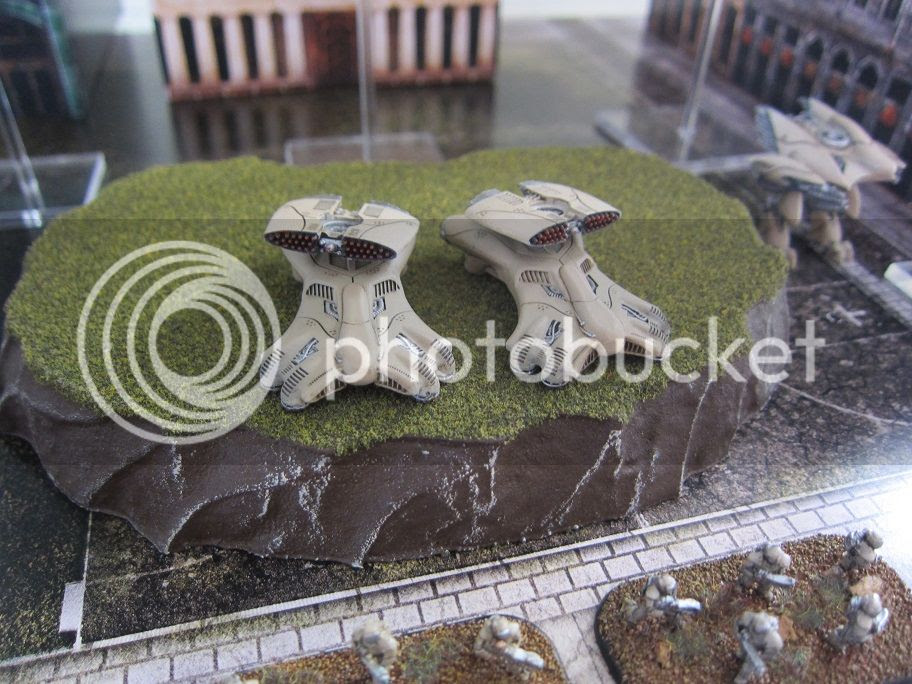 (The beautiful in deadly Helios are my current "works in progress")

These following two images are everything I love about Hawk Wargames: 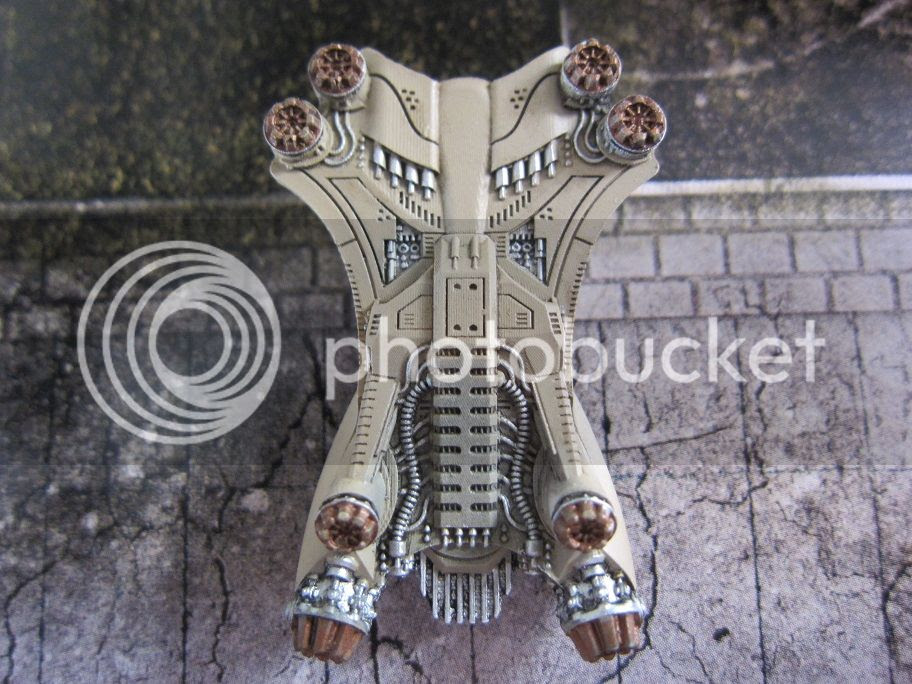 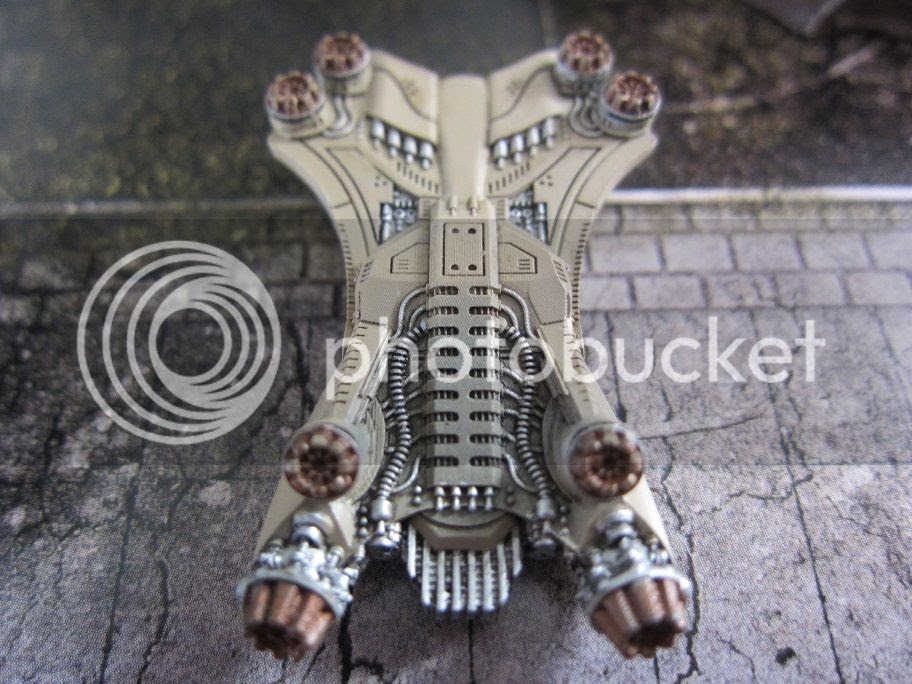 (This is the bottom of a model that is 1.5" inches long. And inch and a half and they have that much fine detail. I've got it about 80% painted but I just adore looking at the details)

And finally some infantry have finally got some paint on them. These are close to done with just a bit of edge highlighting to be done. 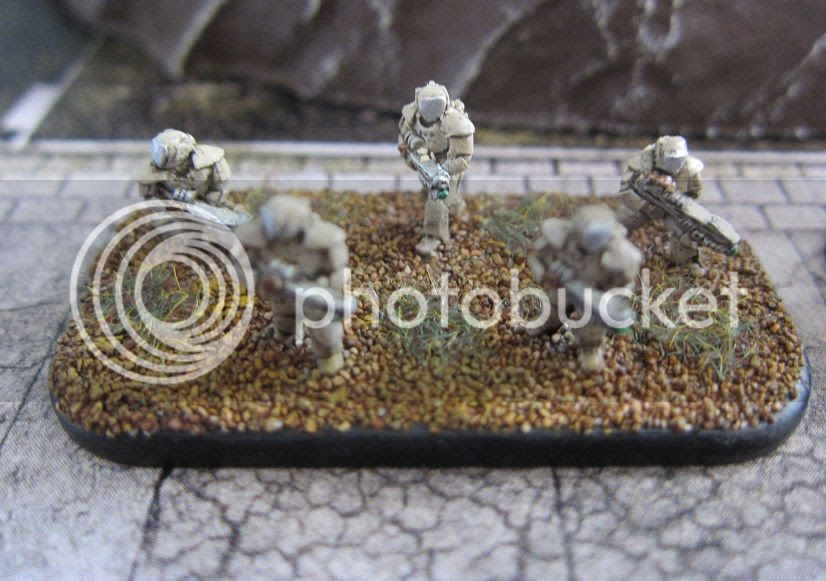 Hope you all enjoyed this update. As always, thanks for stopping by. Comments and suggestions are always welcome.